HomeNewsIn the newsTop award for Doves as EcoSure honours service excellence in sector. 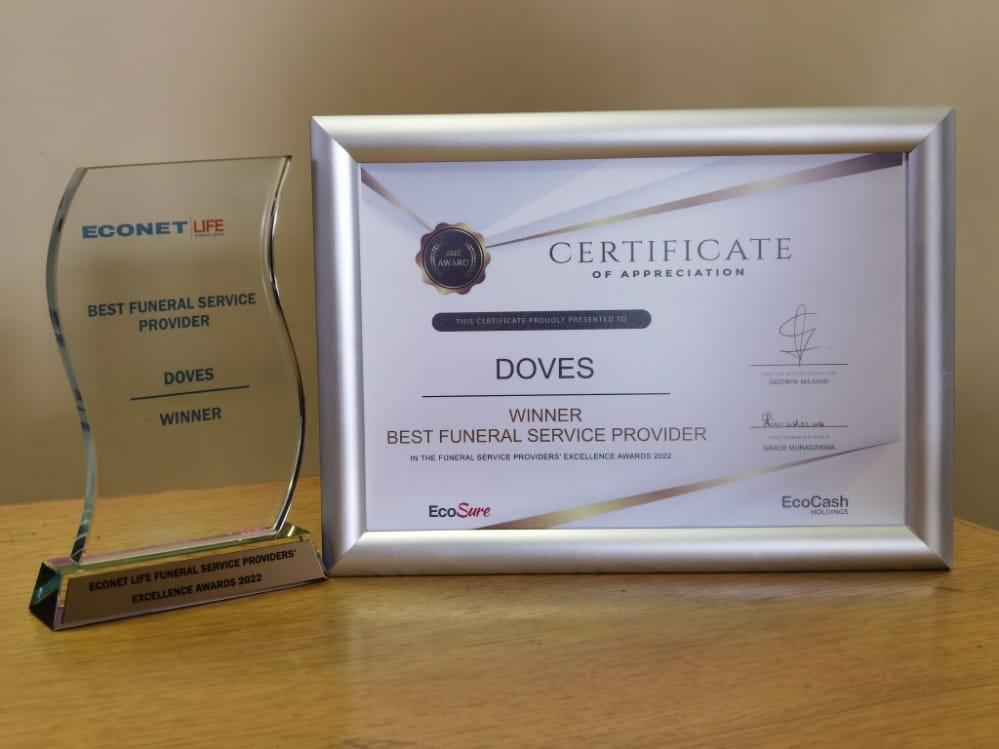 The awards, hosted for the second consecutive year by EcoSure – a subsidiary of EcoCash Holdings Limited Zimbabwe – recognise funeral service providers that demonstrate outstanding quality of service to the public.

EcoCash Holdings chief commercial officer Gilbert Tsongorera said the group believes that all business’ involved in the funeral services deserve outstanding recognition for the “difficult, emotional and heartfelt service” they provide to bereaved families every day.

“Our aim is to recognize hard working service providers that go the extra mile to ensure our clients are offered an exceptional service during the most difficult time in their lives,” he said at the awards ceremony.

Tsongorera paid homage to funeral service providers for braving the coronavirus pandemic and continuing to offer great service despite the challenges presented to the industry by the pandemic.

“Our funeral service providers have represented us well across the country despite the difficult environment they have had to operate in during the pandemic,” he said, adding that EcoSure’s partnership with the service providers was working well for the benefit of the public.

EcoSure –  which has been an undisputed leader in driving social inclusion through its affordably prized micro-insurance products – has over 2.2 million customers.

At last week’s awards ceremony, First Mutual Life was the first runner up in the best funeral service provider category, while Milos Denga won the best performing agent ahead of runner up Susan Makaure.

The best channel partner went to Farley Funeral Services while the runner-up prize went to Kings and Queens Funeral services.

Zonyik Funeral Services walked away with the People’s choice award and Sunrest Funeral won the best newcomer award, ahead of Runyararo.

The most improved partner award was scooped by Warranty Funeral, while Heritage Funeral was the first runner up. Leonald Michael Monson won the Funeral Director of the Year ahead of Kingdom Blue, while the low-cost provider award went to Kuwadzana Funeral service. Good Hands Funeral was the first runner up. The EcoSure CEO’s award went to Taedzwa Funeral.

EcoSure also took time to honour funeral service providers from Manicaland, which offered free services to families of 39 people who lost their lives when a bus they were travelling in veered off the road and landed in a gorge during the Easter Holidays